The Urban Land Institute (ULI) has long been a leader in socially and environmentally responsible development practices. Building Healthy Places is an outstanding example of ULI’s continuing leadership of the industry. Active Living Research is proud to have been involved in Building Healthy Places since the very beginning. I am very enthusiastic about this initiative’s ability to contribute to better health in the US and elsewhere. Building healthier communities creates an infrastructure that will provide benefits for decades. Participating in ULI events is a wonderful opportunity to bring the lessons of 15 years of research to real estate professionals who can put these lessons into practice. I was honored to have a speaking role in ULI’s first national conference on Building Healthy Places in 2014 in Los Angeles. In 2015 I participated in a workshop in San Francisco.

In 2016 I joined ULI, and my experience has been very gratifying. I want to write about two wonderful ULI-sponsored events in May 2016. Both events were organized by the ULI San Diego-Tijuana chapter. On May 11 the inaugural Healthy Places Awards Gala was held in San Diego. There was a great deal of excitement about the Healthy Places Student Competition Teams who displayed posters of their creative designs. Several Healthy Places Awards were selected from many worthy nominees from throughout San Diego County. It is encouraging to see the many examples of healthy and active design.

The big moment for me was the announcement that I had won the “Healthy Place Visionary Award.” This was a great honor, and there were two reasons it was extra special. First, the award was presented by Dr Dick Jackson from UCLA. Dick was one of the earliest leaders of the healthy places movement and one of the best communicators. He is also a valued colleague and good friend. Second, I was surprised by the announcement that all subsequent “Visionary” awards would be named after me! I humbly thank ULI and the awards jury members for this special honor.

Another highlight of the Healthy Places Awards Gala was that I met the organizers of the next ULI event I attended in Tijuana, Mexico. Gabriel Garzo was the ULI lead, and Sergio Gonzalez and Maricarmen Castellanos of Probien in Tijuana were the organizers of the first Baja California Real Estate Symposium. I was invited to be a speaker at this impressive event that was held May 26, 2016 in Tijuana. My goal was to inform the 600 real estate professionals who attended that they are “health professionals” because their work affects the health of their clients–for better or worse. I tried to inspire them to build healthy places that make active living safe and convenient, and I provided principles and examples of active design derived from research. I hope I contributed in a small way to improved planning, transportation, and real estate development practices in Tijuana and throughout Baja California. I congratulate the organizers on a very well received symposium, and I thank them for inviting me to speak and for showing such wonderful hospitality. 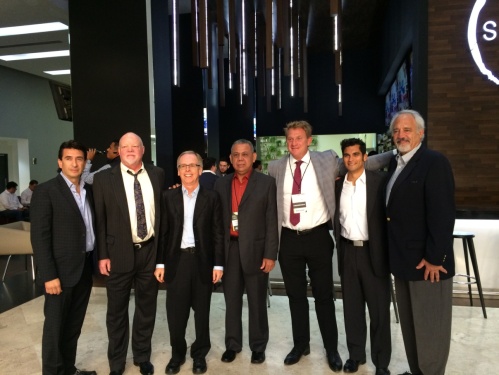 Though it is obvious that planning and land development in Tijuana in the past has been centered around automobiles, it is clear this is changing in a healthful direction. I saw the first leg of a Bus Rapid Transit system that will open soon. I toured the Ontiveros Ranch that is being developed as a mixed-use, walkable community. I attended the opening celebration of Bajalta, which is a very urban mixed-use development in downtown Tijuana that is likely to change the future of Tijuana. I hope I will stay informed about the healthier development practices starting in Baja California, and hopefully, contribute to making them as healthy possible. Salud!