Home » Uncategorized » March for Science: A Good Walk for an Important Purpose

March for Science: A Good Walk for an Important Purpose

What does it take to get scientists to leave the comfort of their labs and climb down from their ivory towers? Apparently it takes denial of evidence, belittling of science, disrespect and intimidation of government scientists, and dramatic budget cuts for every research program in the federal government to prod scientists to hit the streets and raise their voices. To put it mildly, street protests are not a comfort zone for most researchers. Why did thousands of scientists, science educators, engineers, entrepreneurs, and fans of the scientific enterprise March for Science on Saturday March 22, 2017 in hundreds of cities around the world? Because we understand the essential role that science plays in every aspect of our lives: protecting the health of the planet, improving the health of people, making our education system more effective, creating new technologies that will hopefully be designed to enhance quality of life for people, and learning more about how our vast and wonderful world works. 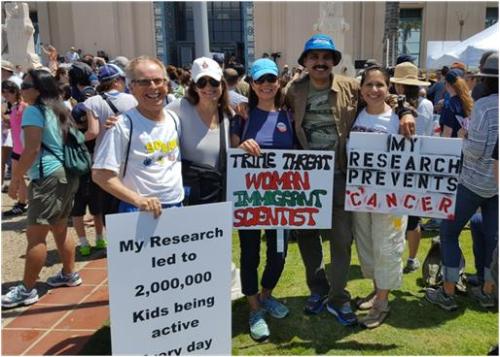 With colleagues and students of public health and medicine at the San Diego March. We look happy, but we are also upset, energized, and determined.

My sign refers to our SPARK physical education and physical activity programs that began with NIH-funded grants. The evidence-based programs have trained thousands of teachers, improved the lives of millions of young people, and created dozens of jobs over 25 years.

Like many others I have been appalled by the recent verbal and fiscal attacks on evidence of all kinds, science in general, and climate science most particularly. There is a celebration of ignorance and propaganda over systematic generation of evidence. Efforts of the Administration seem designed to overturn the Enlightenment so we can go back to the Dark Ages when dogma and superstition ruled. As scientists we have dedicated our careers to advancing humanity through research. Many of us do applied science, and our goal is for our evidence-based solutions to the many problems facing our country and world to be applied in the real world.

But let’s not be naive and think that everyone loves science. Current attacks on science and government regulation are merely spikes in a long-term trend. Getting serious about reducing carbon emissions is bad news for the fossil fuel industries. EPA regulations are not welcomed by chemical industries. FDA regulations are an annoyance to the pharmaceutical industry. Prevention efforts led by the Centers for Disease Control and Prevention are fought by food and beverage industries, as well as tobacco, alcohol, and gun industries. Evidence from independent, government-sponsored research often threatens the bottom line and images of these industries, so they fight science through lobbying and campaign donations. These are all powerful industries that see themselves as benefiting from less research, at least less of certain types of research.

To counter this opposition, who is fighting for research and evidence-based policy making? Scientific organizations speak up for research, but their resources are tiny compared to the industries working so persistently and effectively out of the public eye. What can be done to increase support for science and evidence? That was the theme of my Presidential Lecture at the Society of Behavioral Medicine Annual Meeting in March 2017. “Research translation” is about getting evidence used. The movement of evidence from scientific journals to real-world application does not happen automatically or by magic. It requires action, and some of that action needs to come from researchers ourselves. The people and organizations who can use the evidence in education, business, practice, and policy need to know about the evidence. So, an important role of scientists is to take steps to communicate research results to potential “end-users.” Many researchers are hesitant to take that step, either because they don’t believe it is their role, or they don’t know how to go about it.

But we are now in a situation where we need to do more than just communicate our results. We scientists are on the front lines of defending our nation’s commitment to science itself. More than 150 years after Abraham Lincoln started the National Academy of Sciences to “advise the nation,” it is hard to believe that American science is being attacked. One of the main functions of the March for Science was to educate the public about the critical role of science in improving lives. Common themes were climate and health. The economic impact of research was not emphasized so much but may be equally important.

I joined many thousands of scientists and science supporters for the March in San Diego. It was a typically beautiful day, and the atmosphere was festive. Before the March we had speakers including the originator of the Keeling Curve of carbon concentrations in the atmosphere, from the Scripps Institution of Oceanography at UCSD. We also heard from very young scientists who were excited about the important problems they are investigating. It was inspiring to meet physicists, teachers, biotech workers, parents, and children who came up with clever signs and spent their Saturday on the March. Here are just a few photos.

An inspiring event does not create change, but it is a great first step. Being energized by the March for Science could galvanize marchers to become communicators, activists, advocates, and donors to continue the work of supporting science. During talks at the end of the San Diego march, speakers referred to the great turnout for the First March for Science. I hope there is not a need for a second one. But if a second one is needed, I will be there.

By drjamessallis in Uncategorized on April 25, 2017.
← Impressions of SBM 2017 in San Diego Life Is Change: Professional and Personal Updates →